Shipping detail: laid down article in a rigid box.

Demsky started his creative journey getting immersed in the graffiti boom in the early 90s. Since then he has been travelling and spraying throughout more than 50 countries and still feels obsessed with twisting the morphology of his name in multiple, unconventional shapes.

Being a self-taught, his artistic influences are rooted in the graffiti movement, the fluor era and his current nostalgia around the late 80s and early 90s, although nowadays these are expanding also towards obtaining a balanced mix between future and nostalgia, radical creativity and exact sciences.

As a kid he used to spend his time playing arcade games and watching Japanese mecha and sci-fi movies in VHS mode.

Now Demsky feels eager to expand his artistic output and develop new concepts in his studio work – a new approach to develop a more conceptual side where he tries to bring new artforms around the interconnected relationship of space and time array with a strong focus on finding the glitch and animating static compositions.

More precisely, it is a glance to the future from those nostalgic times, an ongoing personal therapy exercise based on getting immersed in creating impossible shapes gravitating in multiple dimensions in a organized chaos environment.

Understanding art as a vehicle to stimulate senses and heal the soul, Demsky has collaborated with worldwide galleries and multiple cultural and commercial projects.

He currently spend most of his time shut away in his laboratory breaking the artificial atmosphere. 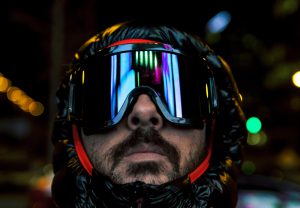